Posted by mollyt333 on November 1, 2018
Posted in: Buzzard Productions. Leave a comment

2018 will be remembered as a sad year with lots of great muso’s passing away but none is sadder or will be missed more than my great friend and drummer…Dessie J Johnson (aka. Greg Gilbert) 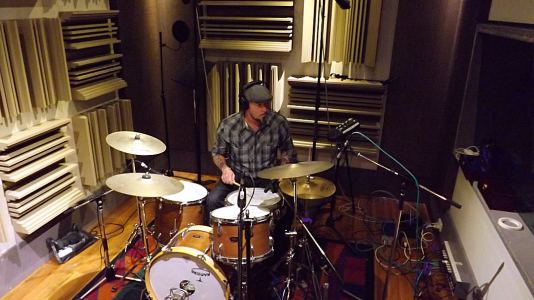 Dessie was, as described by himself:

the World’s largest midget and World’s youngest oldman, a self confessed genius and lazy drummer….and proud of them all…

80’s pre punk and indie bands like “the Pits”, “This 5 minutes” Tex Perkins & the Dum Dum’s” and ” the Johnson’s” are band names that Dessie was know for….drumming out thousands of tunes over the decades before landing in syncopation with southern Cajan bootleg band “SWAMPHOG”

A great fusion was created with Guitarist/Vocalist Grant Turnbill and Bassist/Vocalist Buzz Talay playing the Cajun sounds of bands like Tito & Tarantula, Tony Joe White, Huevos Rancheros, 1st Edition and the like….

With the relocation of Turnbill resulting in him leaving the band, a replacement was difficult to find to maintain the unique sound that Swamphog was providing. It was then decided that Talay moved to guitar/vocals as half the repertoire was his vocals anyway.

Finding a bass player was proving almost as difficult, for at the time, Talay, was using a 5 string Fender and playing a lot of low “B” notes, which combined with the super syncopated drumming from Dessie j Johnson gave very low down swamp feel.

After a few auditions, Chris Arthur entered the room and seemed to fit nicely but with other projects etc. the band was stalling a little and consequently had a hiatus for a few months.

At the time, Dessie J Johnson had also been filling in for a drummer-less outfit called “the Tractor Jacks” and had done some gigs around the rockabilly scene in Brisbane. These guys wanted to record a song and in true form Dessie bought them over to the BUZZARD RECORDS studio on the south side to record.

Tractor Jacks were then struggling with a line up changes and in the pursuing months lost their lead guitarist just weeks before the 2005 “Wintersun” festival.

Once again, in true form, Dessie J was on the blower asking Talay if he could do a 1 gig ONLY fill in ……”10 songs of rockabilly” that’s all Buzz”….”you’ll be right..you’ll kill em”….